Expectations are a tricky lot. Set them too low and you’re likely to underperform in life. Set them too high and you risk eternal dissatisfaction no matter how much you achieve. How do you get them right where you need them?  A question that I’ll need to answer in regards to my son…that every parent has to answer.

Got to thinking about this because of a volleyball. Not a famous ball like Wilson from the Tom Hanks’ movie, Castaway.

One might argue a volleyball doesn’t discriminate and is beautiful in that way.  The volleyball doesn’t care if you’re male or female, black or white, gay or straight, Bruce or Caitlyn Jenner, because if you hit it correctly with good form and good power, it will go pretty much right where you want it to.

So, that same ‘one’ might argue that the volleyball didn’t intend any trouble to me personally in the two games I’ve played this year with our coed, company sand volleyball team, where the ball has been inconsistently scattering around the court after my hits. But it sure feels personal.

When I throw a baseball or football or shoot a basketball, the ball more often than not, goes pretty much right where I want it to.  I’m confident of my command of those sports balls, so it’s really disheartening to have this particular ball give me trouble. Well, enough of this…the ball stops here.

So, last night after our game, with a squeezed grip on the volleyball, in forceful but hushed tones, I began to ream it’s seams out.

Our conversation as follows…

ME: What was that all about?!

ME: You’re making me look a fool out there! I’m an elite athlete who played college football, a top finisher in various 5K and 10K road races throughout the years and can still nail a turnaround jump shot from 15ft out.

Ball: Congrats, Bro. What’s that have to do with volleyball?

ME: What’s that have to do with…?! I’m an athlete, I pride myself on that…so this mediocre play in volleyball is hard for me to handle. Kinda messes with my identity if I can’t succeed in a sport. Get it?

ME: I mean, I started to play volleyball after graduating from college and moving to Chicago. I played two years in the Co-ed beach Social League-and I’ll have you know my team won the championship my second year!

Ball: Congrats again, Bro. What year was that?

ME: Nineteen ninety ffffffff…oh, I see. You trying to say that was a long time ago?! I still got it, pal. Don’t get ballsy with me!

ME: Just asking, my butt. You’re trying to insinuate that just because I haven’t played in twenty years that I shouldn’t expect to pick up where I left off?! To serve, bump, set and spike with powerful ease? Especially without practicing?!

ME: Well, that’s just…that’s just…really…really…some..what…reasonable. I guess.  I practiced a lot more at those other sports I mentioned. I’m just not meeting my own expectations. And that hurts-deeply. Like lose sleep, bothersome, can’t get that song you can’t get out of my head annoying, such as Baha Men’s song “Who Let the Dogs Out?” 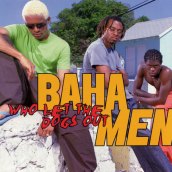 ME: I’m serious. I don’t have all day to practice your damn sport. I have a job. A wife. A son. A home to take care of. That’s a lot! I don’t need this guff from you.

Ball: Dig this. You can’t have high expectations based on nothing but ego. Leggo your ego, Bro.  Practice if you want to improve. Or don’t. But just realize…expectations without effort is as pointless as…asking ‘Who Let The Dogs Out?

Ball: Thanks…ooh, I got one more for ya to contemplate, then I gotta roll.  If you don’t put forth the important effort to properly place your expectations, you’ll end up lost in a tumultuous sea of life, restless as the tides, feeling confused and abandoned like a Castaway on a deserted island…that you’ve created in your mind, and finally resorting to talking to a volleyball in a desperate attempt to stay sane.

Mind blown, the volleyball dropped from my hands, bounced a couple times and rolled away. I didn’t expect that a ball could serve me such a profound realization. But, as I’ve discovered, expectations have been hard for me to get a handle on.

But I have to learn how to manage expectations now because I have a son to raise and he will expect me to set his not too high nor too low but right where he needs them.