Bernard worked and then took over the reins of the farm where he was raised and reigned over his 250+ acre dirt empire with admirable attention and affection. The farm buildings were straight and clean, the yard well kept, and animals well-fed. 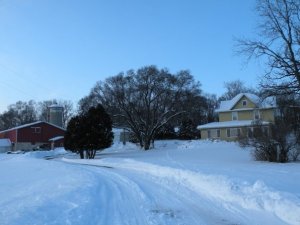 Despite back-bending, hard labor work his entire life, he carried himself with a regal dignity. Shoulders back, chest out, and eyes smiling. 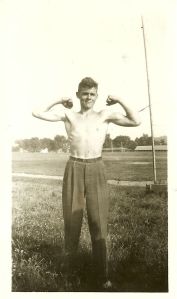 Bernard respected himself, his wife, Louise, his family, his church, his community, his work, and anyone he met.

He was comfortable and familiar with a tough day’s work. As if the upkeep and production of his dairy farm and large family wasn’t enough to cripple a healthy man, Bernard held two jobs outside of farming, parts at Carl F. Statz machinery, and odd jobs handyman to locals in the area. Later in life, he was a top repairman for his son David’s TV and appliance store, Kennedy-Hahn. Somehow he found the time to play on Waunakee’s Home Talent baseball team for many years and was very proud of the several championships he was a part of.

Bernard’s hands were gnarled like the roots of a tree as a result of handling the metals, machinery and tools of his trades. Getting a close look at his hands resting on the table one day, I asked him what was wrong with them. He shrugged his shoulders, “Oh. It happens when you get old.” No complaining, no flaunting, just straight forward, matter-of-fact responses.

Undaunted by his overloaded obligations, Bernard maintained a positive outlook on life. He often whistled and sang in his Irish tenor while he worked. The same on tune performances he would give in church on Sunday. An Irish Catholic who faithfully attended service every Sunday, sitting towards the front, in the characteristic persistence of his work and family life.

On his old, sore knees, he’d still humbly kneel down before the God he believed in.

Grandma and he said the rosary every night and on road trips.  As a young teen, I road along with them once to Cincinnati to see a play their son and my uncle Paul was performing in.  In the front seat, my grandparents would trade off between Our Fathers, Hail Marys, and Glory be to the Fathers. I would mumble along at times but mainly, just wishing for the decades of the rosary to be finished and for the radio to be turned on.  Though I admit to a sense of security I felt knowing that if we did get in an accident, God couldn’t help but put us on the express lane to Heaven.

Grandpa was 100 percent Irish and advertised it often. Always celebrating on St. Patrick’s Day by wearing his wool Irish cap.  Green was his favorite color. He painted his home accordingly and I’m hard-pressed to remember him in any clothing other than his green work uniform. The only fight I ever heard him getting in, outside of the sparing he did with his brothers, was when some loudmouth at the shop made a derogatory comment about the Irish, on St. Patrick’s Day to boot. Bernard had to put the man in his place–which happened to be pressed hard against a machine.

Should any of his seven sons scrap in his presence, he would intervene, “If you have that much extra energy, I have plenty of chores for you.” A peace accord soon followed.

Tough but fair, elected as the town chairman of Westport for over 27 years, Bernard Kennedy served his elected office with the same pride he took in his land and in his family.

When a resident called to complain at 11PM, he took the call and listened while my grandmother shook her head and wondered why someone would call the house so late. When his good friend on the board spoke out of turn, Grandpa stepped in to tell him to wait his turn and let the others be heard. When a substantial snowfall would blanket the area, Bernard instructed the truck drivers to plow his street last, after the rest of the community was taken care of, sometimes, he’d even helm the plows to help get the job done.  A shining example of what a “public servant” should be. I wish every politician would follow his example. In fact, the worst insult he would say about a cohort was with a disappointed head shake, “He’s…he’s a politician.”

The town’s administration building was erected some years ago and named after him. Deservedly so.

Often in my youth upon telling a local my name, the common response would be something like, “Kennedy? Related to Bernard?” Yes, he’s my grandpa. “Oh, known him for years. Your grandpa’s a good man. Salt o’ the Earth.”

With 22 aunts and uncles, thirty six other grandchildren, I found it impossible to get one on one time with my grandpa.  On a recent search, I couldn’t find any pictures of just he and I. Probably true for most of us grandchildren…and his children, for that matter. But, nevertheless, his influence was far and wide.  He and I share the physical tic of twisting our wrist to crack our arms, my sister likes to point out. Also, I swear Cash when he looks up at me with a certain look, he reminds me of my grandpa looking over his glasses with a scrunched brow. Their similar blue eyes, glimmering with curiosity.

Bernard Kennedy showed this same sort of servitude, loyalty, and respect as a husband to his beloved wife, Louise, of over 54 years. 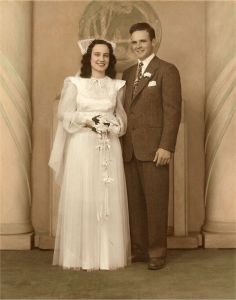 Grandma used to say the only way she knew Grandpa didn’t like one of the meals she’d prepared is that he wouldn’t ask for seconds. She also joked the reason they had so many kids was because Grandpa mumbled. He’d crawl into bed and say, “You wanna go to sleep or what?” She’d reply, “What?”

And grandpa took that to mean, well…eleven kids.

Bernard lost his other half in March of 2000. Louise was 77 and died of liver cancer. 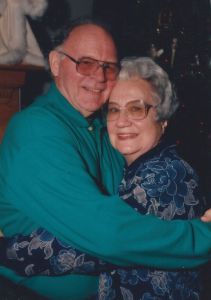 In her absence, he slid to life’s background.

He was still kind and cordial, but there was something missing in his eyes, in his voice, in his mind, in his heart. He was there but he just wasn’t.

His good health and sturdy genes forced him to stay in a world that no longer felt like it was his anymore. For eight years, he patiently waited to join Louise before finally joining her in 2008 at age 88.

Grandpa once said, “Young people may die, old people must.”

The “good man” was laid to rest in the cemetery behind the church he attended his whole life, next to his long-time wife, the other half.  Bernard never got over Louise.

Good thing, now he lays beside her. 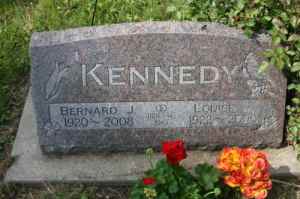 Bernard Kennedy-the salt of the earth-returned to it, hay in the barn…and the harvest of his family still growing strong…thanks to the man who raised things. 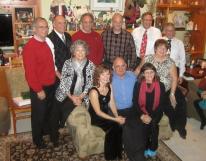 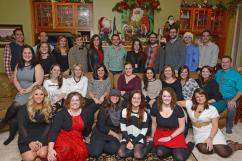 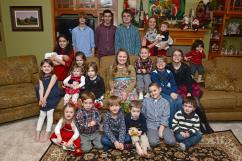