My wife Meghan said this in response to my informing her that Green Bay was playing their first preseason game last night.

Our excitement at the advent of football season is inversely proportioned. Picture a see-saw…I’m the one feeling high and she’s feeling as if she’s been dropped to the ground.

Meghan understood when she married me, or at least thought she did, how important football is in my life.  But it’s more pervasive than she ever imagined…and probably more than I had as well.

Marriage does that, doesn’t it? Sheds light on corners of your life you swept your habits into without a second thought.

Your mate disengages your inner cruise control…and makes you pay attention like never before to what’s going on.

Growing up in Wisconsin, football seeps into your blood and being via osmosis.

You are hard-pressed to drive through a neighborhood that doesn’t have a Packers or Badgers mailbox, flag, pennant, lawn chair, lawn mower or even, the whole dang house–see below on Main street in my hometown.

Football began it’s embedment in my life once I started to participate as a youth player where the sport provided me, a pretty shy kid, to gain a whole big group of buddies.  I discovered my size, hand-eye coordination, speed, strategy and intensity helped me succeed in the sport.  And, though it sounds borderline psycho to admit, I’d enjoyed hitting and occasionally, getting hit. A great way to unleash frustrations in a conductive, societal-accepting way.

While I encountered puberty and the teens, football was that sturdy foundation I could rely on to boost my confidence, joy and feelings of accomplishment.

All the way through college the sport was as much a part of my education as what I learned in the classroom. Coach Alvarez used to say, “You can’t take a class to learn what you’ll learn playing football at the University of Wisconsin.”  True that.

I went on to coach high school football at my alma mater and grade school in later years.

Heck, I even bond with strangers here and abroad. There are Packers and Badgers bars all over the world…football fans bonding without borders.

So, after several “discussions” with my wife on the topic, we’ve negotiated an agreement. I will limit my consumption this fall to Packers and Badgers games only–4 hours on Saturday and four on Sunday. And one or two Friday night high school games.

From her POV, it doesn’t seem like a big concession. But, she doesn’t fully realize, what else I’m giving up. Thursday night pro and college games. Monday night football. College football Saturdays start their pre-game coverage at 6A and go to 11P with highlights running all night long on the sports networks. Sundays have games running from noon to 10PM, not including the London games twice a year that start at 8A.

While I’m giving up a lot of football, I’m gaining more time with my emerging family.

Football will always be a part of my life. It’s given me grand experiences and purpose in times in my life when I needed it.

Now, I have a bigger purpose. I’ll ease up and bring the see saw to more balance in my marriage. And willingly focus on spending time with my son…and look forward to the days…when we can go outside and throw a football around and attend Badgers and Packers games together.

Dad and son bonding that could even make Momma start to love football…or at least, tolerate it a bit more.  I can hear her now…”Oh $#$% 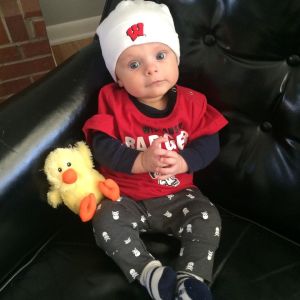