I was looking forward to this day since Cash Michael Kennedy was first born over 15 months ago.

Been a long time coming and lots of early mornings and late nights but it’s paid off because the University of Wisconsin football Badgers have offered Cash a position on their roster in the Fall of 2033!

Wisconsin is joining the trend of other big time programs early age offerings. See Ohio State letter below from coach Urban Meyer to an Ohio one year old. 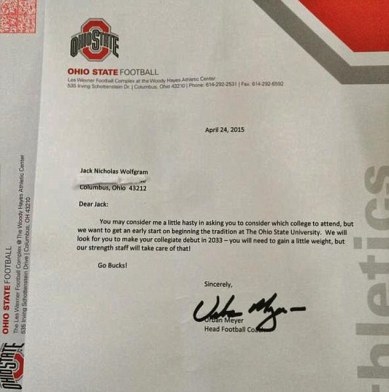 The UW’s only contingencies are that Cash score a 22 or above on the ACT’s and maintain a 2.7 GPA through high school so that he can gain admittance to the university.

These shouldn’t be a problem as he’s a smart kid. He can already identify his mouth, nose, ears, eyes, wee wee, and as of yesterday, his elbow.

It’s very likely Ivy League schools will be soliciting his gridiron services as well. We’ll just see what kind of financial incentives they can provide. I can only imagine tuition, considering current costs of college, will be about half a million dollars by then…roughly. He hasn’t said anything but I still think he’s leaning Wisconsin’s way.

Cash is very pleased with Wisconsin’s offer but wants to weigh all of his options before committing to the Badgers. He has about 16 more years to consider the offer, which should give him adequate time to make his decision. Don’t want to rush in to these kinds of things.

Daddy is very proud and hoping he wears my old number for my old team. Looks better on him if you ask me. 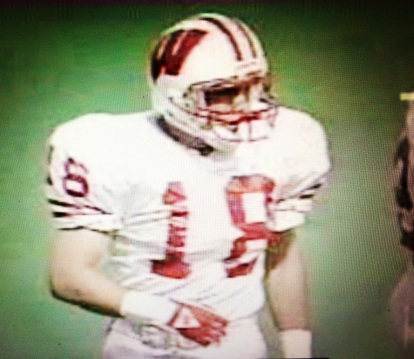 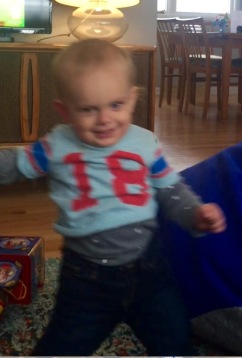 But wherever he decides to go, I want him to be happy and find the humor in life.