The internet has spawned all sorts of unprecedented creativity and idea sharing. I’m especially interested in the “upcycling” items I’ve seen. I believe “upcycling” is a new word that has been spawned from the internet and refers to taking something old and refurbishing and repurposing it into something new.

I’m nowhere near a being a hoarder. I’m quick to get rid of no longer used, no longer worn items. But, I can get nostalgic and as I grow older, gain a deeper appreciation for well-made, interesting products of yesteryear.

So, this past Fall when I drove by a TV set sitting on the curb of an older home, something possessed me to pull over, back up and take a closer look.  The set reminded me of the TV sets my grandparents had in their homes when I was a child.

Don’t misunderstand, I’m a fan of today’s flat screen TVs, thin as an inch and highly defined-we have three in our house.

But, there is something about those old TV sets. The old consoles that were a piece of furniture in family rooms across the US. These were substantial enough to set your drink or dinner on if you had to. Try that on one of these paper thin sets of today!

Still, I drove off thinking, it’s “junk” leave it be and let it go peacefully off to TV heaven. But, a mile down the road, I was compelled to turn around and drive back to it…drawn to it like a magnet.

I parked next to the driveway, looked around a bit cautiously-feeling a little criminally-and quickly hoisted the beastly appliance into the back of my Jeep without “breaking” anything within the TV…or within my spine.

Once it was loaded in, I shut the back and trotted into the front seat and sped off. A check in the rearview mirror confirmed I was getting away, free and clear.

When I arrived home, I asked Meghan to lend me a hand to bring something in the house that “I’d picked up on the side of the road.” She gave me a skeptical look.

Luckily, Meghan is a sport when it comes to these things and has herself “upcycled” several items in her past, some of which are in our house now-our main dresser and TV console.

She agreed the TV set was a pretty cool find but left it up to me to find storage and a purpose?

With our large basement that wasn’t a problem, but I needed to find a use for it.  It, not surprisingly, was dead-which was fine considering I didn’t think it would supplant any of our current TVs for viewing.

A search on the internet revealed a few ideas, but not as many as I thought there might be. The main ones were removing the screen and tubing and replacing it with an aquarium. Cool, but we weren’t interested in having one or owning fish.

Another option was to make it a lighted bar. Seeing as we have a toddler, having a low set, accessible item with tons of glass and bottles, didn’t sound like a smart move.

One more had the screen and tubing replaced to create a cat bed. Uhh, no. Our cat, Emmitt, has too many places to sleep around our house already.

I decided I wanted our son Cash to interact with it. I liked the juxtaposition of old and young.

An original-at least as far as I know-idea surfaced in my brain–I’d paint the screen with magnetic paint and convert the set into a magnetic board on which Cash could use his colorful magnets!

I pitched the idea to Meghan. She was actually impressed and told me to go for it.

So, I bought the paint, had the brushes and tape and went to work.  The magnetic paint is cool but really thick, so I had to stir it with a one inch thick piece of scrap wood I had in the workshop.

So, over the course of a couple nights after work, I painted on layers, waiting for each one to dry, and reapplying.

After six coats, I decided to bring in a trial magnet…and it stuck easily and cleanly!

I ripped off the painting tape, scratched out few errant paint dots and I was on to my last step, insisted upon by my wife…to clean “the crap out of it!”

I scrubbed and sprayed and scrubbed and exactoknifed and buffed and wirecutted and pounded anything else that protruded…and finally, my upcycle was complete! 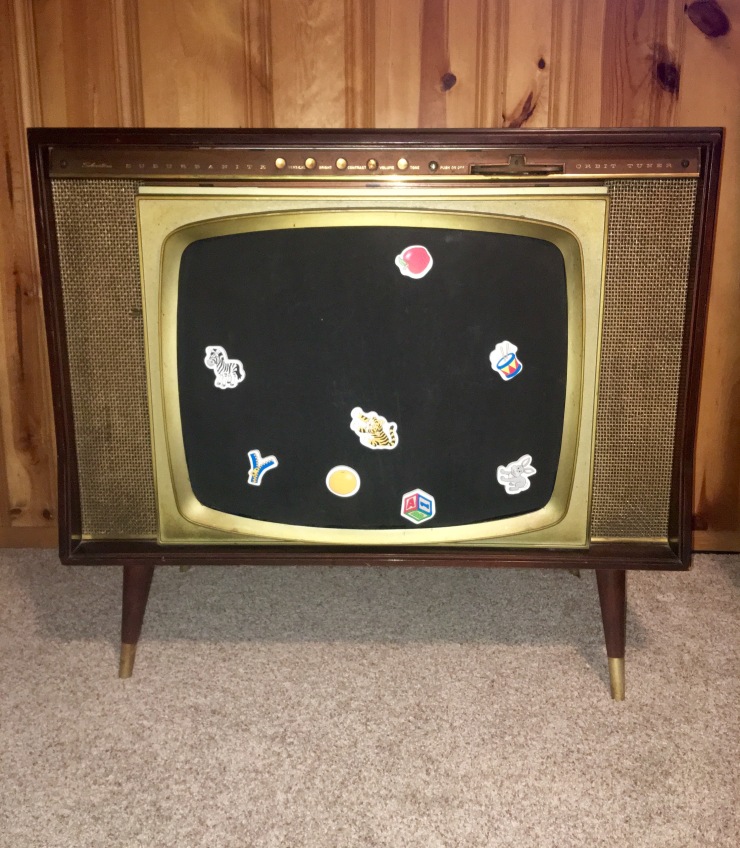 But, the real test of my success would be if Cash would want to use it or not.

When you’re only halfway to success, you still succ!

I’m pretty sure that I just invented that phrase. Anyone know how I can start making and marketing T-shirts, coffee mugs and bumper stickers?!

Anyway, you may know from last week’s article https://wordpress.com/post/wisconsindadger.com/1715

how much Cash enjoys touch screens.  This was taking that to a different level!

I set it up in his baby cave and let him loose. He passed through the valley of his toy mountains and went straight to this newest playroom addition.

He sat up…and immediately started moving magnets off, on, and around the screen!

As I watch Cash play, I feel good that I gave this TV set a new purpose.

“We expected this you know,” my dad said to me on my high school graduation day.  He was justified to not feel so impressed because I was raised middle-class, from generations of graduates at a high school with a 100% graduation rate. (http://www.publicschoolreview.com/school_ov/school_id/90816) *I included this source because 100% sounds unbelievable-and certainly there were years where not everyone graduated but still an incredibly high percentage did.

Point is, it would have taken some major screwing around on my part to mess up enough not to graduate high school considering my situation.

It was a foregone conclusion that I would graduate not only high school but college as well.
The same expectations go for my son, Cash. To this end, I have opened a college savings fund for him arranged where a small amount money is deducted from each paycheck and syphoned to.  If I understand correctly, this fund can be tapped into by Cash to pay for any type of schooling after high school.
This dollar amount is not going to be any sort of windfall and at the skyrocketing rate of college tuition, may end up only being enough to buy books for his first semester by the Fall of 2033.  (Tip: Buy them used!) Wait…who am I kidding? By then, there won’t be “books,” just apps for purchase on downloads to the chip implanted in this head like everyone else will have.)
The other day I filled out a cost estimate sheet that figured we’d spend almost $330,000 on Cash to get him to his 18th birthday…that’s not to give him a silver spoon in his mouth, that’s just to have something on any kind of spoon to keep him alive and well.  Considering we’re still a month away from even getting him to his first birthday…we got some money-makin’ and money-savin’ to do!
By the way, I would love to assume Cash will be a highly-recruited strong safety/wide receiver to top colleges but ultimately, choose to play for his daddy’s alma mater, but I ain’t going to (the) bank on it.
Who knows? If Cash ends up not wanting to attend college and instead wants to learn a trade at a tech school or some kind of apprenticeship, that’s okay by me as long as it interests and challenges him, falls in line with his skill set and brings him joy when the job is finished, he has our full support.
As we prepare to scale the kid-raising, financial mountain ahead, we’ll take it step by step and paycheck by check.  Our hope is that when Cash becomes an adult and faces the rest of his life, he can take not only the money but also the lesson that in life, a little at a time goes a long way. 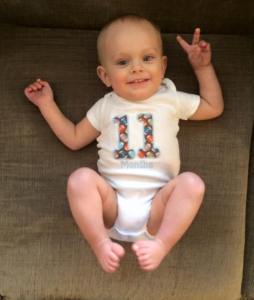 Cash is practicing his lines in bed early in the AM, like an actor preparing to go onstage.  Makes sense, his main profession right now is entertainer. And audiences have received him well, very enthusiastically well.

Yesterday, he picked up a piece of cereal from the table and put it in his mouth…all by himself. This eye-hand-mouth coordination garnered a big smile and small round of applause from MMMMMMommommomma and a “There ya go, buddy!” from Dadadada.

Cash has received these types of excited, positive reactions from all those around him his entire eight-plus months on this earth. Even after a bowel movement, MMMMMMommommomma serenades him with a happy melody as she changes his diaper, “Stinky dubby no more, stinky dubby no more.” She always finishes the process with a few big kisses to his smiley face.

And it’s the law that his grandparents-Grandma, Nana, Sido, Grams, Bubba, Grammy and Grandpa Vern–spearhead the ranks of his adoring fans. Hollywood celebrities should only hope for such admiration. 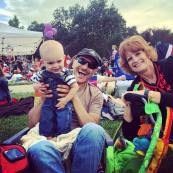 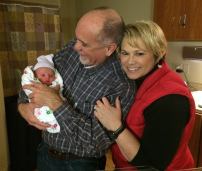 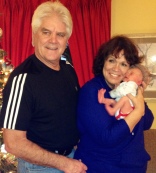 Recently, a woman in a Northern California Home Depot stopped Meghan and was enamored enough with Cash’s cuteness that she took a picture of him. Again, the stuff of celebrity admiration.

Up until now, all of us who are fawning over him can only watch his reactions and surmise what he’s thinking.  As I observe him, I’m filled with wonder about what he’s seeing out our backyard, through our living room window, from his car seat and his stroller point-of-view.

With his emerging vocabulary, we’ll be able to better understand and know his what’s going on in that little head of his.

If Cash is like every other human, not all of his thoughts and words will be as pure and wonderful and profound and complete as we project them to be.  But, that’s also what’s so exciting about this new talking phase–we’re finally going to be able to get a peak into the mind of this little guy we’re all so in madly in love with.

We’ll have the ability to help correct, improve, scold, encourage and shape his words and his thoughts…and he’ll do the same for us.

For his extended family and especially Meghan and I, Cash has already redefined our thoughts on love…and the seemingly impossible search to find the words to accurately express how deeply and thoroughly we love him.